You Can't Change Nothing

Here’s a meme I saw this week: 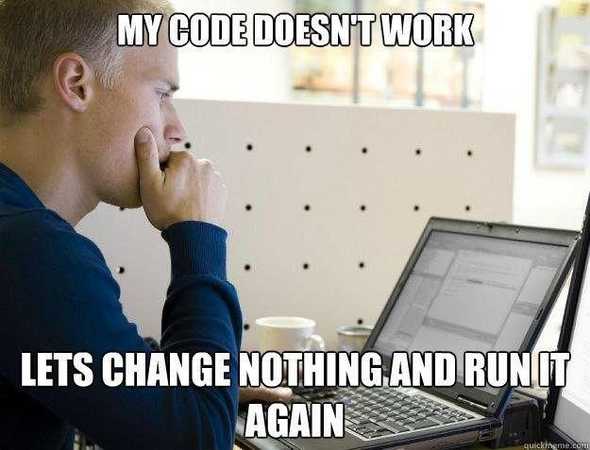 Here we have a person debugging code, and they’re saying “My code doesn’t work. Let’s change nothing and run it again.”

This is something that I’ve done. It seems like a complete anti-pattern. But that’s not quite correct.

Repeatedly “running it again”, by loading a page, printing something, or starting an automated test, without making a prediction– yes, this is a bad practice. But sometimes trying something twice is a solid technique. The reason is that even if you don’t make a change, that doesn’t mean that nothing has changed.

What You Can Learn

Let’s say you run it again, and the issue doesn’t present itself on the second try. You haven’t fixed the bug. But what might you have learned?

Mindfully running it again means acknowledging that there are many variables at play in software, many of which change on their own. That’s useful to remember.

Even if the bug does happen twice, running it again means you get to see it again. Maybe you’ll notice something you didn’t the first time.

You can’t change nothing, so don’t hesitate to run it again.